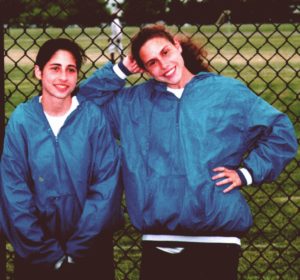 When we were freshman in the Fall of 1999 an article appeared in Guide Post with the following headline: “Former North Student Dies of Heart Failure.” I have no memory whatsoever reading the article or obituaries four years ago. But late this year, I discovered the issue as I was cleaning out the Guide Post office. The shocking tenor of the headline stuck out in my mind. It pierced and prickled my skin; it made me feel something I’d never felt before, something almost impossible to describe.

The young woman, Julia Rusinek, a 1996 alumna of Great Neck North, and a student at Yale died suddenly in 1999 of undiagnosed heart failure while doing a summer internship in Washington D.C. There was an inexplicable magnetism between us. Spiritual unity. I’d never felt the power of a soul or believed in the existence of a bridge between the temporal and all that lay beyond. But that day, the connection was real and seemed premeditated by some higher power. Just having been admitted to Yale, I felt like I was meant to sustain her legacy there and preserve her memory. Was she trying to communicate with me?

I tried to visualize this woman whom I admired for living her life according to her own plans. I’d never met her. But I felt like I had. Her dark hair, her smile. The photograph helped, but it was the words in the paper that made her an organic whole in my mind and in my heart. What struck me most about the un-timeliness of Julia’s passing was the death of a woman who had made a promise to herself to live each day of life as if it were her last. Where could such passion and poise come from, I wondered? One article expressed how ironic her diaries were because they expressed a strong premonition of her own finite time on Earth, revealing that Julia had a deep understanding of what her role here was. Her intention was to experience everything before her time was up. She can’t do that. But I can do it for her. We all can.

As my eyes scanned the elegant portraits of Julia’s life printed in the paper, her legacy was becoming synthesized with my own. Her fingerprint became a part of my spirit, her smile a part of my soul. She lives on in me just as other past members of North live on in all of you. Our greatest triumph as a class is how we keep a legacy alive.

However dimly perceived each of us is to the others, we have all made eternal imprints on each member of this class. You may not realize it now, but just as I have pieces of you somewhere within me, perhaps each of you has a Romy Drucker somewhere in you. And because you have a piece of me, you have a piece of Julia It is in this way that we keep North aflame.

Author Virginia Woolf, in her novel Mrs.Dalloway, beckons us to a world in which people connect through a more fluid way of seeing things. People connect through each other, and leave pieces of themselves with those they encounter, whether it be a local grocer, a friend or a total stranger. Nothing is defined absolutely. Today, we find ourselves floating in a world much like that. We’ve given each other the imprints and now it’s our time to share them with the world.

The unfinished brushstrokes of Julia’s life leave us all wondering what might have become had her potential not been cut short and her painting not left incomplete. But because of the way Julia lived, she compensated for an unready portrait, she triumphed over the troubles of creation. The agony of an artist is the fear of an indifferent audience with an apathetic reaction. The agony of an artist is a need to leave his or her mark and not be misplaced in the vast annals of history. But the agony of the artist also goes beyond a need for response and recognition. It is the pain, the pleasure, the pity, the piety, the pride that comes in making yourself a part of something, calling it your own, stamping it with your humanness and boldly presenting to the world to be judged. Julia was an artist. We too are artists. We are not constrained by the firm edges of our canvas’ nor the fleshy boundaries of our bodies; we must embrace our limitlessness and extend into each other, into the past, into the future, and into ourselves. May we light our torches and use them to carry on a legacy, not only Julia’s, but our own.