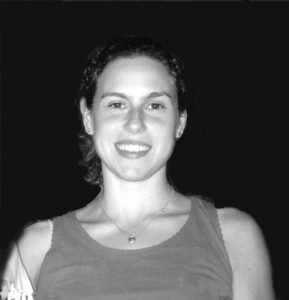 In 11th grade, in Mr. Schloss's English class we read Sherwood Anderson's Winesburg, Ohio. One of our most favorite vignettes in that book spoke of a long, winding apple orchard. The orchard, while beautiful, has been stripped of its lushest, fullest apples. All that were left were gnarled, twisted apples. There they remained, Anderson wrote, because far, far too few knew the sweetness of the twisted apples. Julia Rusinek was one of those few.

She saw something in everyone, and she was everything to me and to all who knew her. Though we are here, of course, to mourn her death, how much more fitting it is for us to celebrate her life - for she made every one of our days a wondrous celebration.

She had so many precious virtues: an other-worldly grace, the fiercest of intellects, loyalty, honor, and - because she always got my jokes - a keen sense of humor. Her talents were legion - she was a spellbinding writer, a dedicated athlete, and even an artist: so long, she would tell you, as the only thing she had to draw were hands.

Two things above all dazzled me. The first was something I alluded to already: her laugh. It was in ninth grade that I begun to know that laugh very well. And it was all because of a substitute teacher at North High School. Julia and I recalled this story often. You know, we'd heard about some of the substitutes before we got to the school. We knew there were some real doozies there. Well, one day we walked into Ms. Schlessinger's class to find a sub standing in the front of the room. And she starts the class and things are going fine until we got to talking about why the main character Suse in Rumors of Peace wouldn't speak out against the internment of her Japanese-American gardener. Well, we all had ideas about why. Some said she was afraid, others said she didn't know what she could do. But no, that wasn't what the sub had in mind. She told us that Suse wouldn't speak out because she was oppressed by men, that men everywhere prevent women from rising to greatness, and goes on like that for a minute. Now we were all shocked and a little bit scared. But not Julia. Julia got this wide eyed, wonder-filled look of discovery on her face, points and says "you are the feminist, sub!" And we'd been laughing ever since.

More stunning than her laugh, though, was her unbounded compassion for others. Never before have I met someone so ready to give. There is nothing she wouldn't do for her family - for the parents she cherished, the sister she worshipped, or for her grandparents, cousins, aunts and uncles - who somehow were always visiting Great Neck whenever the two of us wanted to have plans. She would do anything for her friends - everyone of us from North High through Yale feels we were closest to Julia because she showed us more love and support than you could ever anticipate from another. There is so much love in this room now - but we couldn't even begin to measure it against Julia's love for literally all things and all people.

I remember vividly her getting angry with me in tenth grade because we were having a conversation about prejudice and I said, "well I believe all people are prejudiced in some way." And she argued with me about it for a couple of minutes and then hung up. Two hours later, she called me back and said "Michael, I've been crying for two hours. I know it's silly, but I just cannot believe that all people aren't fundamentally good."

All people aren't, I remember saying at the time. But I knew then as I surely know now that I was saying it to someone who was goodness in its purest form. And I should have said that.

You know, lately, Julia had been having the most difficult time choosing a career - she'd swing from lawyer to doctor to teacher within the matter of seconds. She was really upset that she couldn't reach a decision.

We were out for coffee this past Tuesday and she wanted to order dinner too. She said "I am sick of this. I want to just make up my mind about something." So she opened up her menu, looked over it and said "for dinner I am definitely going to have the chicken - or the grilled cheese - or the salad."

She had the grilled cheese, but that's besides the point. I believe the reason she had so much trouble making up her mind about a career is because - and she would never say or think this - but we know, there is no career that could have enabled her to do all the good she was capable of giving to this world.

It is humanity's most profound loss that she won't have the chance of living out her potential. And I feel like we have been robbed of our most precious jewel.

But I know this. She would not want us to weep - she herself is still smiling that glorious, glorious smile and the angels are returning in kind.

No, she would not want us to weep. She would want us to channel our sorrow, our frustration, our longing for her into a larger struggle: creating a better and fairer world. She would much prefer that we work to ensure that no child goes hungry, no one goes ignored, and no one person anywhere goes unloved. She would, I have no doubt, want us to dedicate our lives to picking the most twisted of apples and tasting the sweetness she knew inside.